Posted on February 7, 2015 by chezsylvia

I think I’ve hit my 3/8 life crisis. Is there such a thing? If not, there is now. While in my quarter life crisis, the biggest question was, now that I’m out of school, what am I going to do for the rest of my life? At the 3/8 life crisis, the questions become (for me), Is my career going in the right direction? What next? Marriage? Kids? How badly do I want those?

Too many questions! The answer: I need a brownie.

I tried to make these Chocolate-Stout Brownies from a recipe I found from Bon Appetit magazine. I actually thought I’d make them for a Superbowl party I was going to. However, they didn’t turn out the way I wanted. Mostly because I decided to not listen to my gut (never a good idea).

I followed the recipe more or less to the letter. Except, instead of Guinness, I used Young’s Double Chocolate Stout. I also cut the sugar to 1 cup. I also used 60% Cocoa, bittersweet Ghirardelli Chocolate.

When reducing the room temp stout, I found that part way, it started smelling really bitter and burnt. Despite my stirring. So, I stopped the reduction early and only got it to reduce to 3/4 cup.

I baked it according to the directions, for 35 minutes. At the end of 35 minutes, the center was strangely still jiggly. The tops was cracked and brownie like and the toothpick test came out clean, but that center was not set. I got nervous. I left it in for a few more minutes, but was so afraid of overbaking it, I decided to take it out. Maybe the 40 minute rest will let it set, and maybe it was supposed to be more fudgy.

I finished off the brownies after adding the top layer and letting it cool. When I cut into it, the center did not set as I had hoped. It was still very much underbaked. 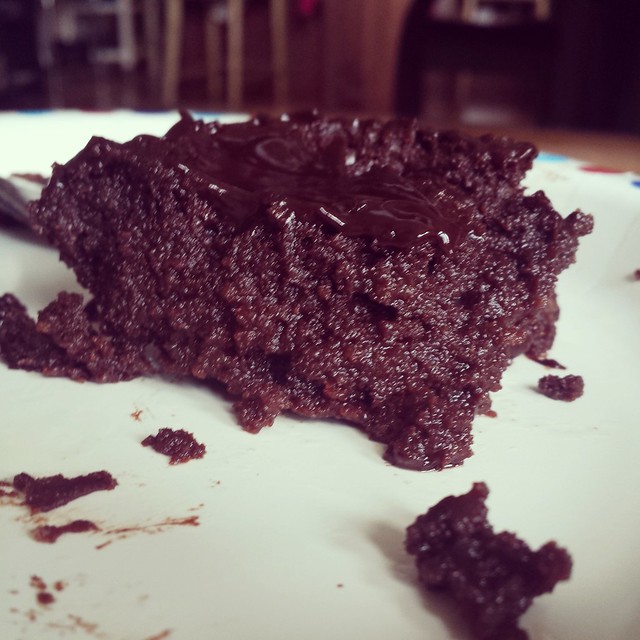 I was so disappointed. What was I supposed to bring now? I ended up quickly thawing a sheet of puff pastry I had in my freezer and churning out some mini cinnamon sugar palmiers. But what do I do with this brownie mess? I put it back in the pan, wrapped it up and threw it in the freezer. I had four bars of good chocolate invested in this, I couldn’t just throw it out. I was running late, so this was a problem for future Sylvia to figure out.

A couple of days later, I decided to face the brownies. I took them out of the freezer and broke off a piece and tasted it. It was amazing. It was cold fudgy chocolate goodness. A touch grainy in parts, but for the most part, all that underbaked brownie batter set up in the freezer and it was like eating frozen fudge. So, I divided up the pieces, wrapped them up and threw them in a bag and in the freezer. 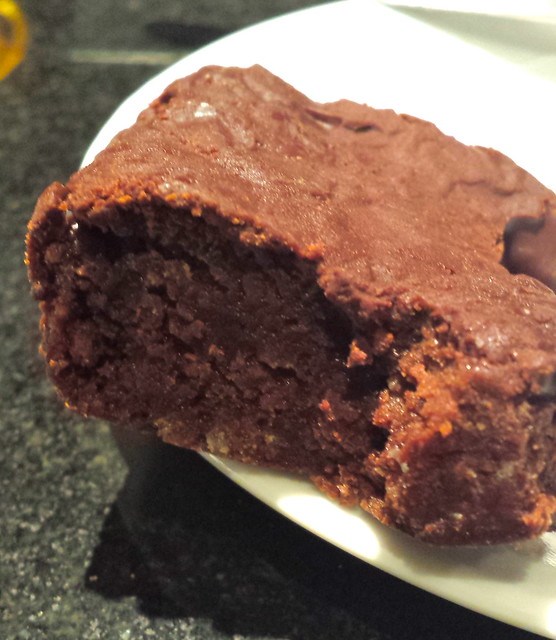 Engineer during normal working hours...photographer, baker, cook, runner, crossfitter and traveler the rest of the time.
View all posts by chezsylvia →
This entry was posted in Beer, Dessert and tagged baking, brownies, chezsylvia, Stout. Bookmark the permalink.